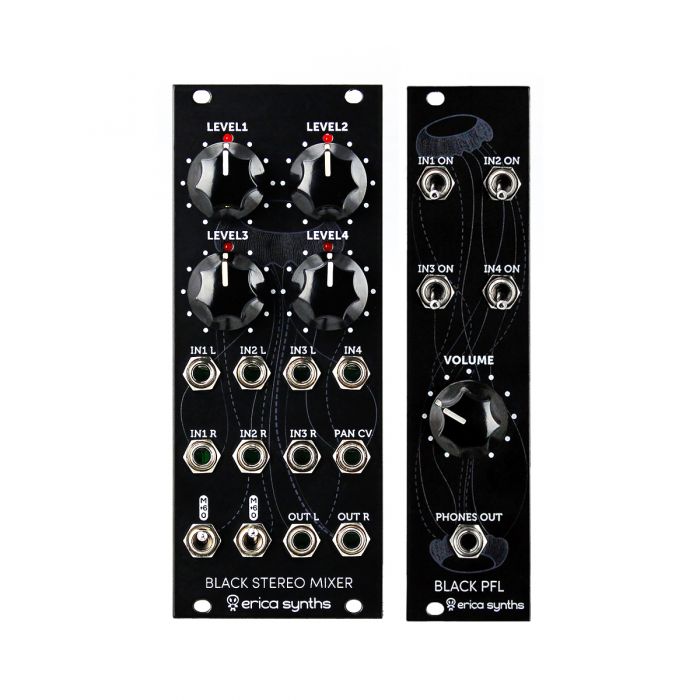 Erica Synths Black Stereo Mixer is just what you need if your setup has several of the nowadays more and more popular modules with stereo inputs or outputs like Black Hole DSP, Erica Fusion Delay, MI Clouds or others.
Features
3x stereo inputs with simultaneous volume adjustment on both channels
1 mono input with CV stereo panning
2 inputs with L and R channel merge feature
Selectable +6dB boost for IN1 and IN2
L and R outputs
Signal level LEDs
In order to save rack space, we designed a compact mixer with a lot of cool, performance oriented features.

Check out also the Black Pre-fade Listen Expander that is a satellite module to Erica Synths Black Stereo Mixer!

Erica Black series are high-end modules with unique functionality. Only the highest quality components are used and all inputs and outputs are protected against undesired overvoltage. When designing the Black Series, we did not economise on the module width, we put design and usability first. Big knobs are assigned to functions that make difference in sound. Together the Erica Black series are a range of modules that make an entire synthesizer.

Since modular performances are often about uncertainty, unpredictability and sudden filter resonance screams that can kill loudspeakers, it’s good to know what is it that you are about to fade into your modular mix and this is where the Black PFL Expander comes in! You can monitor each of four Black Stereo Mixer inputs or any combination of them before mixer level knob takes effect.