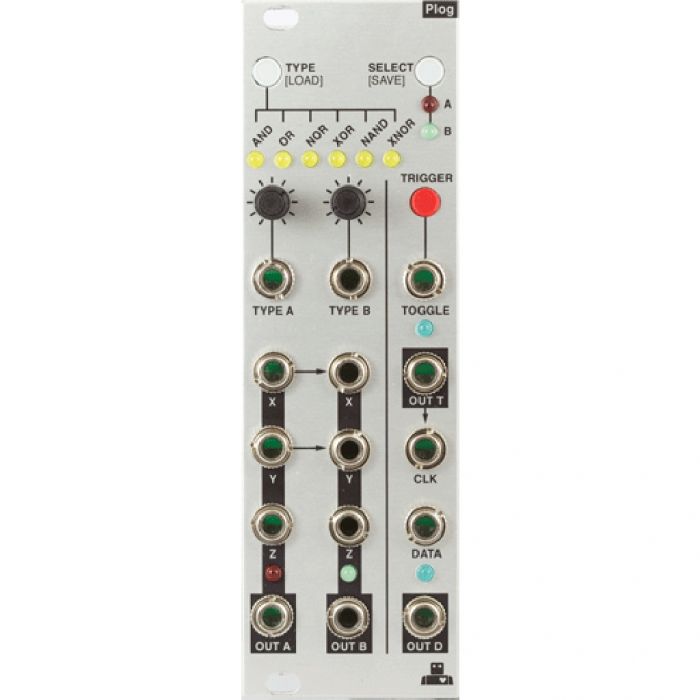 Be the first to review this product
£199.00
Sorry, this item is out of stock.
SKU
160721300529023
" "
Notify me when this product is in stock
Add to Wish List
Details
The Plog module comprises two programmable logic sections (select one of six different 3 input boolean logic types) as well as a toggle flipflop and data flipflop block. all four sections are linked together via specially planned normals.

This module was primarily designed as an interesting tool to be used with sequencers. you can derive complex rhythmic sequences from basic sparse sources (e.g. from a simple gate sequence or clock). by adding vc control of the logic types via some kind of cv source like a triggered envelope, lfo or sequencer you produce even more complex results.

Plog can also be used in many other creative applications including making interesting timbres and for self generating patches.

Toggle flipflop has dedicated pushbutton for manual triggering of toggle state -if you hold the trigger button for about 1 second it will disable the trigger input jack and become a simple tap clock.

Output of t flipflop is normalled to clk input of d flipflop (inverse output of dflipflop also internally normalled to d input) so that by default the d section also acts as a toggle. this allows /2 and /4 clock dividing.

You can save or load the logic section as a preset for easy recall of patches.

Module can be run at audio rates in order to generate interesting digital sounds.
Copyright © 2022 www.signalsounds.com. All Rights Reserved.