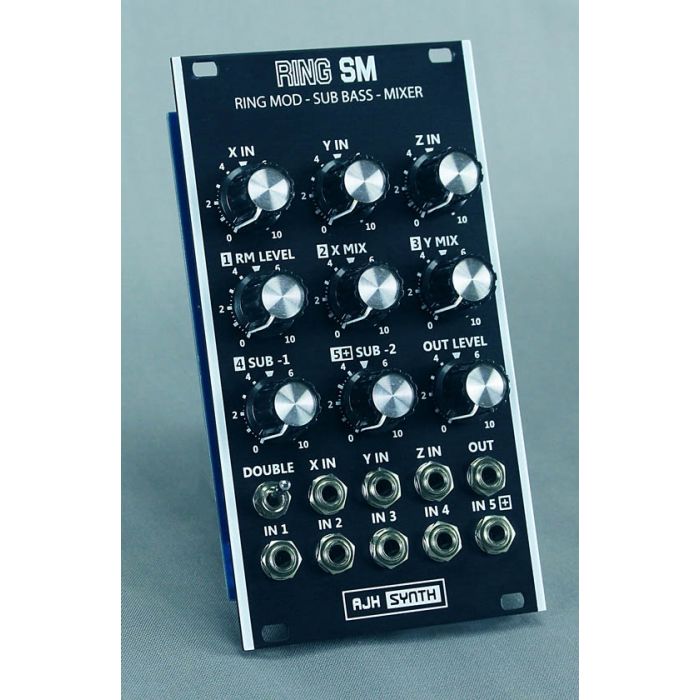 A very unique and warm sounding ring modulator with three inputs, X, Y & Z It is a vintage design based entirely on a discrete transistor core, and includes an extra, resonant Z modulator input. It also has a Frequency Doubling switch, from a single triangle or sine wave input an octave +1 output is generated

Two independent Sub Bass generators with very fast tracking, creating -1 Octave and -2 Octaves from the X input. These are not simple square wave subs, they generate specially shaped waveforms and are useful up to 1kHz – they have a much lower harmonic content than square wave subs, designed to have more power and sit much better in a mix.

A five input DC coupled mixer based on the discrete transistor CP3 modular design dating back to 1974. The Outputs of the ring modulator, X and Y inputs and Sub Bass outputs are routed to the mixer by default – plugging a patch cable into any of the mixer inputs defeats this normalising and allows it to be used as a regular 5 channel mixer for both audio and control voltages.

A clipping / distortion module – input 5 of the mixer is considerably “hotter” than the other four mixer channels and will clip the signal as soon as it hits threshold level. If a DC bias voltage is added the signal is shifted and this allows positive or negative asymmetric clipping of the waveform.