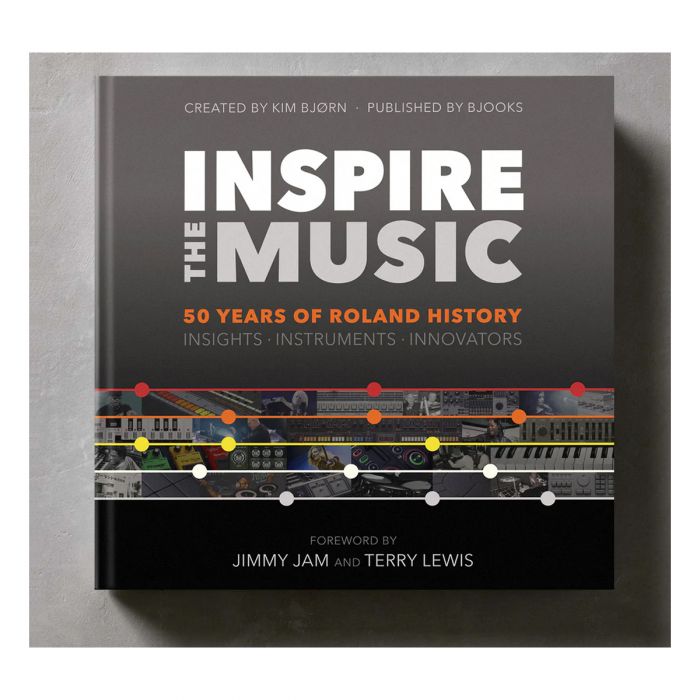 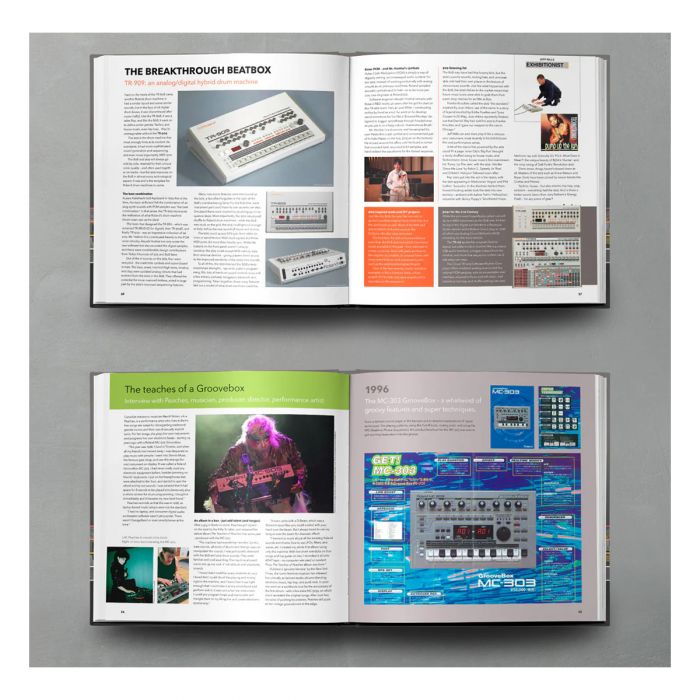 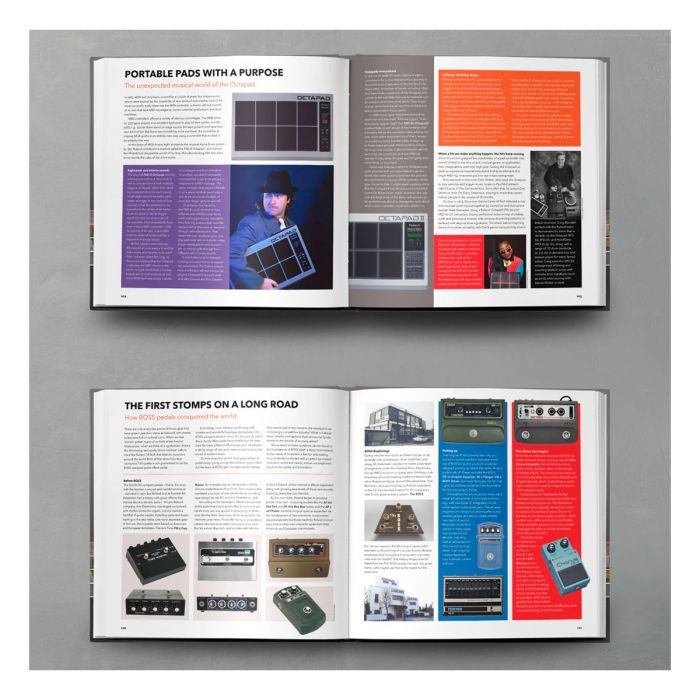 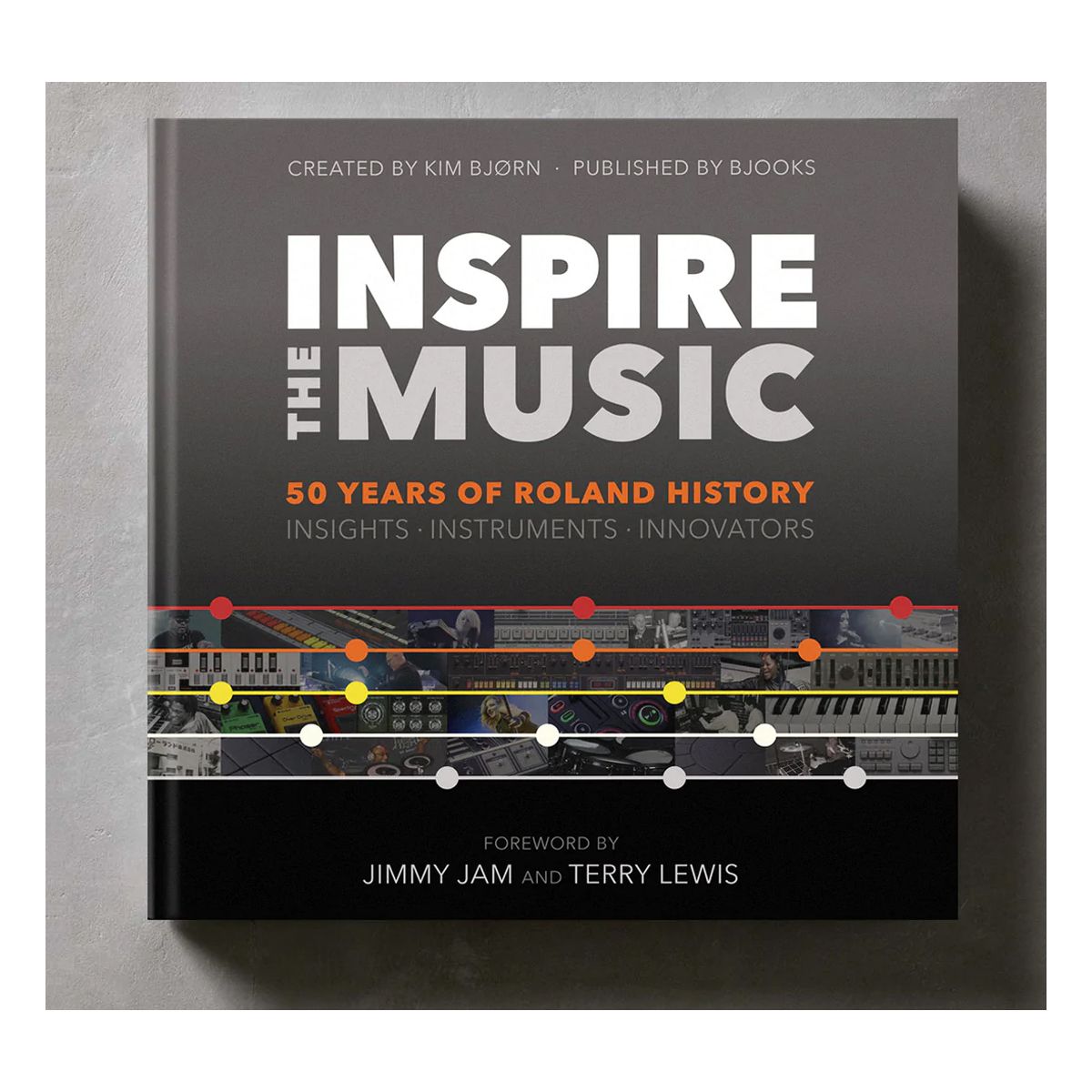 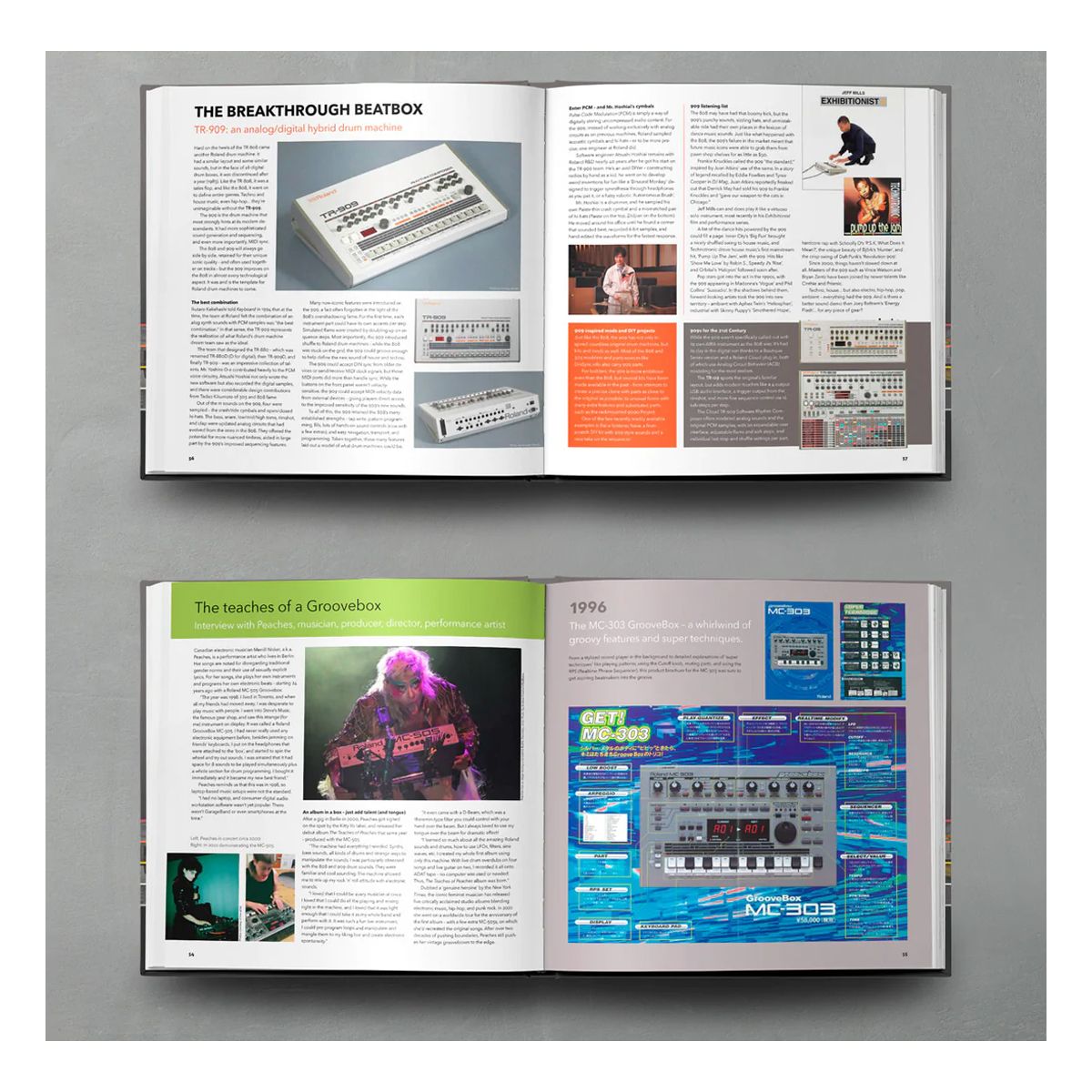 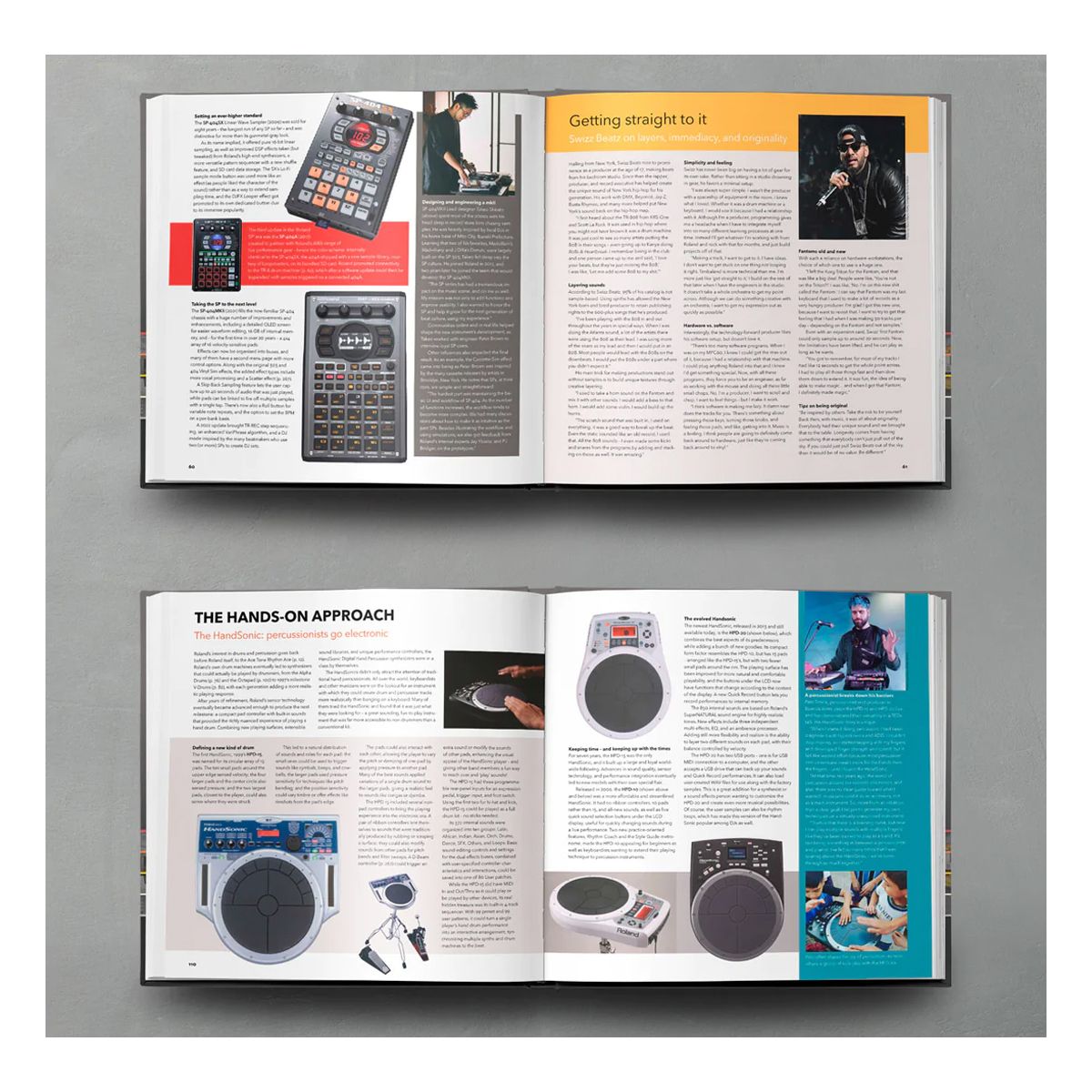 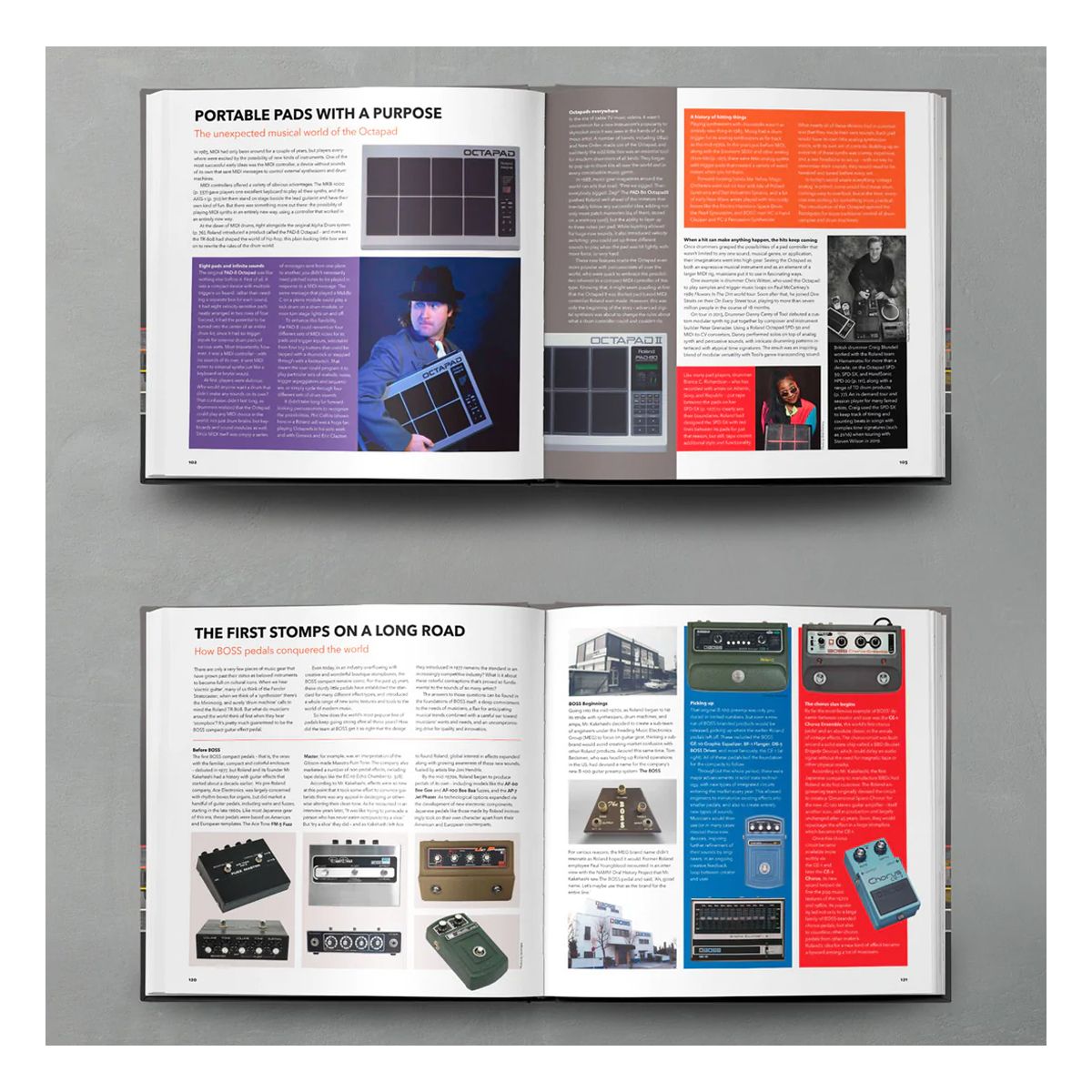 Since its beginnings in 1972, Roland has become one of the most influential music brands in modern history. In 400 photo-packed pages, this book tells the story of how they got there, and how they brought the music world along for the ride.

Insights
Few music companies have had Roland’s sheer technological impact. INSPIRE THE MUSIC details the creation of new instruments doing undreamed-of things: rhythm boxes that played what you told them to, guitars that could make any sound imaginable, grand pianos that didn’t need strings, drum kits you could carry in one hand... seen from within the music world in which they were born, and within the musical universe they helped create.

Instruments
Roland’s music machines have inspired stories, legends, and outright myths. Through research and interviews with Roland’s designers, we’ll tell the amazing true stories behind gear like the JUPITER-8 and other iconic synthesizers, the Space Echo and its role in the roots of Jamaican dub culture, the Octapad’s conquest of Indian music, the Loop Stations’ reinvention of composition and performance, the inspiration and promise of MIDI, how sampling married synthesis, beatboxes and stompboxes and grooveboxes – including the genre-defining TR-808, TR-909, TB-303 – and much more!

Innovators
INSPIRE THE MUSIC also celebrates the community that Roland built, bringing you 90+ interviews and stories covering the work of world-famous recording artists, session and touring musicians, beatmakers and producers, award-winning recording engineers, educators, songwriters, and soundtrack composers – and those who designed and built these machines, and the creative impulses that drove them.

Fifty years of favorites, fashions, frontiers – and the occasional flop
Roland gear has helped define genres and build trends from rock to hip-hop to gospel to world music. In six detailed chapters, you’ll revisit old favorites and meet incredible gear that you didn’t know existed – whether you’re a beatmaker, a guitar hero, or a student of classical piano.

GROOVE: From the original Rhythm Aces and CompuRhythms to the TR-808 and TR-909 rhythm boxes, the TB-303 bass synth, the Grooveboxes, the SP-Series pad samplers, and modern beatmaking from AIRA to Zenbeats.

DRUMS: The evolution of electronic drums from the triangular Alpha Drums to modern V-Drums that play, feel, and sound like acoustic drums, as well as the Octapad, the Handsonic, and reimaginings of traditional drums like the cajón and taiko.

GUITAR: Meet the JC-120 Jazz Chorus guitar amp – a classic that’s still being made after 47 years – the iconic BOSS compact pedals, the world’s first guitar synthesizer (and its many descendants), the genre-defining Loop Stations, and more.

KEYS: The groundbreaking EP-30 electronic piano, the VK-Series organs, revolutions in sound creation and playing feel, the V-Piano, modern digital grand pianos that can fool experts, and the hidden power of the V-Accordion.

SYNTH: Follow the journey from the SH-1000 – Japan’s first synthesizer – through the iconic JUPITER-8, the seismic impact of the D-50, new explorations like the JD-800 and V-Synth, and the brave new world of Boutique Synths and Roland Cloud.

STUDIO: Step behind the glass and learn about the Space Echo, the Roland Rack and the many sound effects it inspired, sequencers and how MIDI changed the world, and the ever-growing interaction between the worlds of hardware and music computers.

And because the endless quest for new and exciting ideas is bound to have some missteps and blind alleys, INSPIRE THE MUSIC includes a number of Roland ideas that didn’t work out. You’ll learn about the studio that needed a stylus, a keyboard that made noise whenever you moved your head, surround sound that didn’t surround, and other interesting Roland moments.

This is the comprehensive story of Roland’s 50 years of history, passion, creativity, and the machines that drive them. This is INSPIRE THE MUSIC.