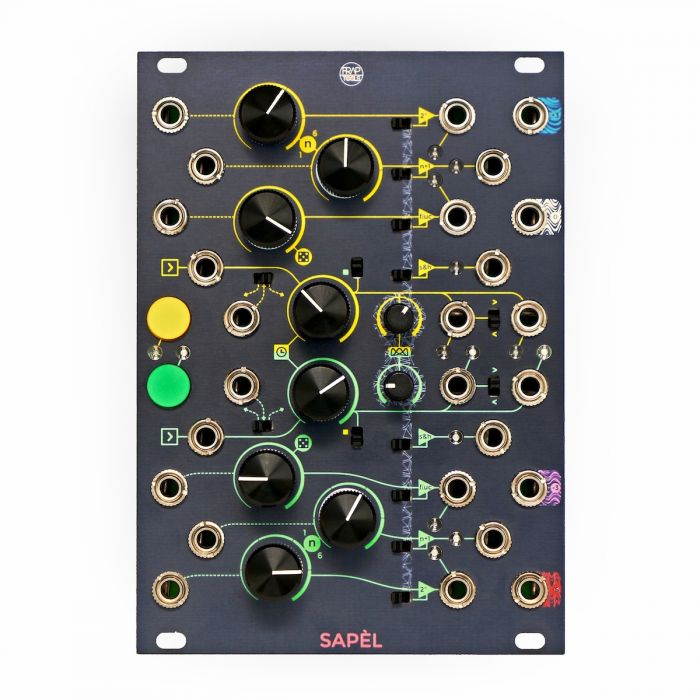 The SAPÈL is a random control voltages source for Eurorack modular systems. It is composed of two main sections, one that generates audio noises, in 4 different versions, and another which includes two specular random clock, random voltages, and clock sources.

Noise outputs are color coded, based on the noise colors, and include:

It is also possible to set a probability distribution with a potentiometer, and apply (or do not apply) the chosen distribution setting to each of the four paths independently.

Furthermore, each of the two random sources section features an independent built-in clock generator, with clock output and random clock output, which can be used in “more than” or “less than” mode. It is possible to use an external clock signal as a clock source, bypassing the built-in one. In addition to that, it is also possible to hand trigger the clock via a manual sample & hold button, which can be also modulated by gate signals.

The clock section generates a precise clock signal and two random clocks. It welcomes also an external clock to bypass the built-in one. The resulting clock signal is used to trigger the sample&hold circuits used in the quantized and non-quantized random voltages and is sent to the clock output and to the random clock output.

A manual Sample&Hold button can be used to sample each time the button is pressed: it holds the voltage until the button is released.

It is possible to modulate the built-in clock frequency or the manual sample & hold.

The random clock output may work in two modes, depending on its switch position:

Each of these two sections generates quantized random voltages, but with a slightly different approach, as proposed in the historical Buchla module Source of Uncertainty Model 266. The principle is similar, but the circuit has been designed from scratch using another approach in order to obtain a more “random” voltages distribution and an extremely precise voltages quantization, capable of generating precise semitones or octaves.

Furthermore, all controls are independent, with exclusive pot and CV modulation to define the number of quantization stages for the n+1 and 2n.

As in the original 266 module, the “n” parameter, which defines the number of stages, goes from 1 to 6:

SAPÈL contains three sample & hold circuits for each of the two main sections (green and yellow): one of these three is coupled with a random generator and creates non-quantized stepped voltages. As described above this signal can be linked to the main probabilities distribution.

This section generates a fluctuating/smoothed random voltage. As described above this signal can be linked to the main probabilities distribution. Please note that this section influences the behavior of the random clock in both modes.

It is possible to define a global probability distribution of the magnitude of the four random signals. This distribution can be activated or not independently on each section with a switch.

Setting the distribution potentiometer fully counterclockwise most of the random signals have a low magnitude. Of course, even medium and high magnitude voltages may appear, only with a smaller probability.

As the potentiometer is turned clockwise the distribution moves through medium to high magnitude voltage probability.

The symbol with a yellow/green background between the two small potentiometers shows an idea of these possible distributions.