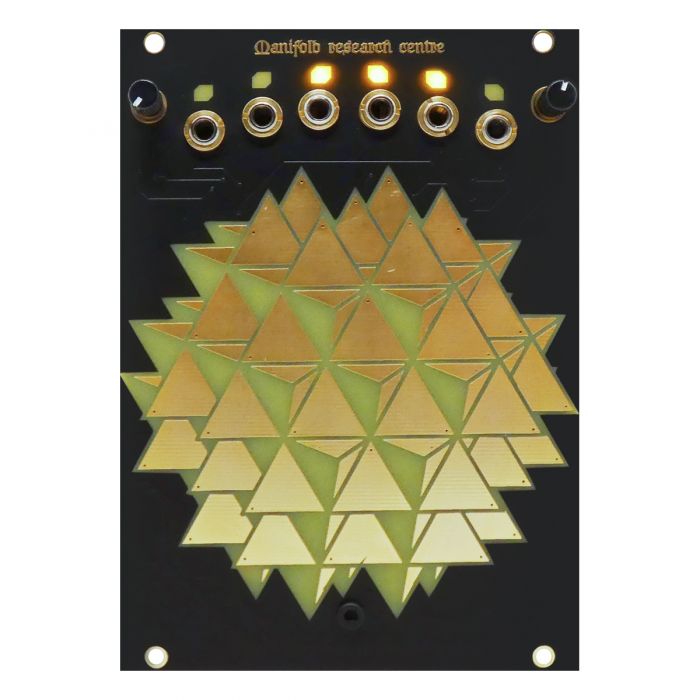 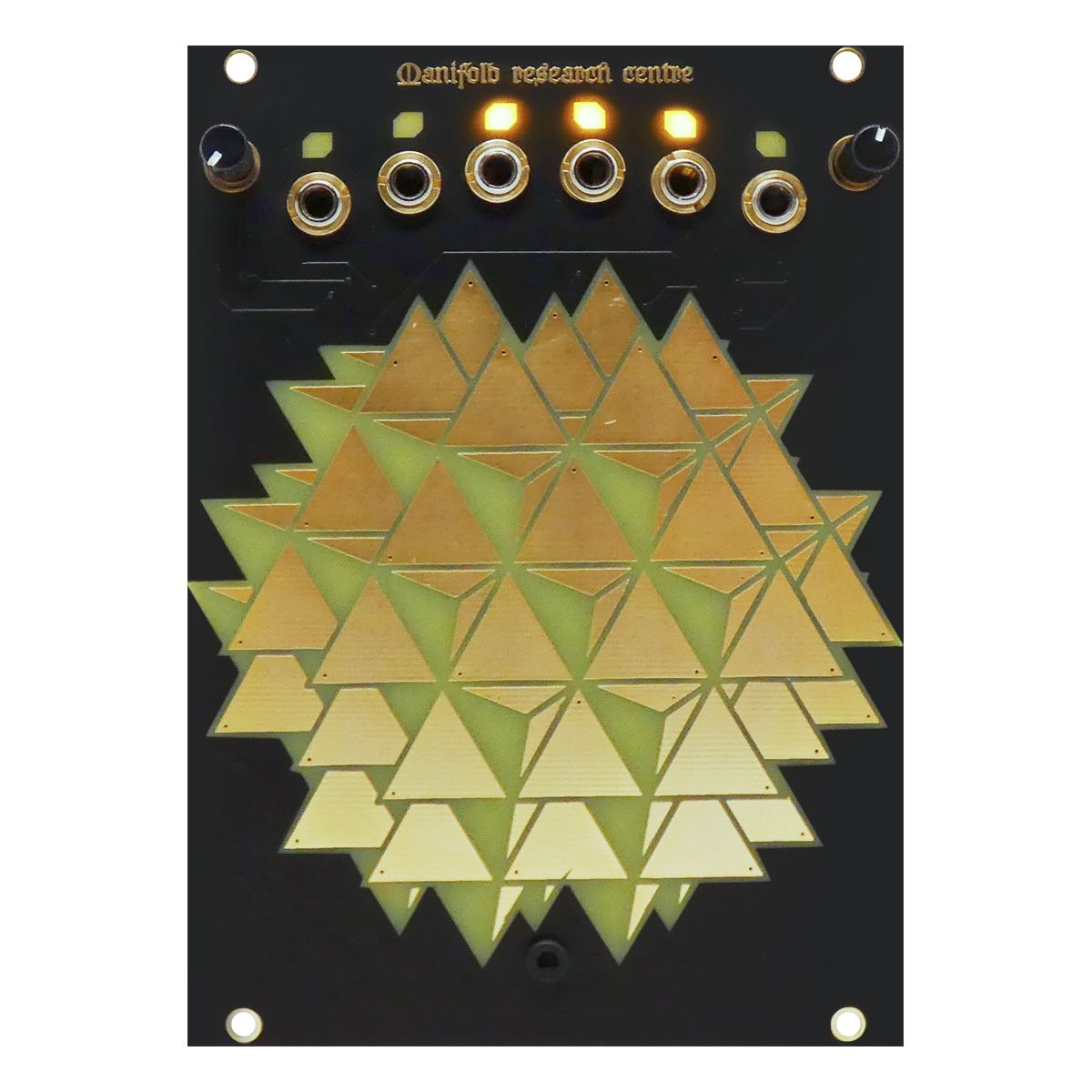 The tetragrid is a 2D cross section of a polytope.

A magnetic-board gate & cv pattern generator, which core is based on ciat lonbarde’s rollz & roolz gewei circuits, and multidimensional geometry.

Inspired by the concept of magnetic board games (and by the stunning magnet matrix from Meng Qi), it brings a rather unusual interface, using magnetic pins directly on the faceplate to create your patch.

The module have 6 square-ish1 lfo outputs, 2 of them (the ones at the edges) have their own speed control pot, while the other 4 are free running. The panel has a set of 30 cross-modulation touch points2 (the playing board). It's by placing the pins on the faceplate that you’ll be able to modulate the different lfos between each other. You can connect together distant pins on the board by using your hand as a conductor (if you dare it!).

1 I say square-ish because the attack can be slightly sloped, depending on how it is self patched.
2 Each one of the equilateral triangles is a cross-modulation point.

More about the outputs

Depending on how the connections are made, you can obtain different type of outs. In their pure state (i.e. unpatched), the lfos output ranges from 0 to 10v (9.4v more precisely).

Those lfos are transistor based and their behaviour can be unstable. It sometimes take a little moment for the connections made to stabilise, with scattered variations, making the module behave like a living organism. When patching, the behaviour of the output changes, it can become anything between a gate, trigger, ramp, a random cv, and can click and crackle at audio rate. It’s even possible within certain combinations that some of the outs stop 3 Although outs are considered to be at unipolar positive voltage, occasional negative spikes can occur.

Oscillating or stall at a DC offset, this is perfectly normal! It is due to the nature of the circuit (when a cross modulation chain is formed by an odd number of cores it behaves erratically), changing pins/pot position will bring them back to life! The output range varies from approx 0.2 Hz (5s cycles) to ≈200 Hz (low Audio rate). Even if the output is set at cv rate, it can output occasional audio rate bursts, bringing life and FM to your patch!
Something you should consider: the magnet pins don’t connect always the pads together, which is due to the tolerances in the flatness of the magnet and the pcb itself. This is something I embraced in the design, as it fits the philosophy of the module by adding an extra layer of randomness (real analog randomness) to the game.

Philosophy
This a random module. it’s about leaving behind the concept of control: realising that it’s the limits of a tool that dictates the way to interact with it, and the results will always be biased (life, innit?). The boredom from sequencers and the false idea of the need to be in control brought me there. It’s an anti-sequencer. Like in a game, there are some fundamental laws/ rules that you cannot overcome. But who am I playing with? you might ask. You play together with the game itself.

How to install the module

Connect to ribbon cable to the power header. Red stripe goes down, matching the white line on the silk screen (we talking about -12v!). Mount the module on your system before powering ON!!! Congratulations, you are now ready to play. Please consider the fact that you will be using moving parts on the module, you don’t want any of the magnets to fall inside your case and short the power rails (worst awful apocalyptic scenario), so be careful about that!

The module mount as well an expander, this is to connect two tetragrids together, by sharing some pads. Orientation of the cable doesn’t matter, as long as you’re using the 2x4 ribbon cable provided.